From a speech by Don Hansen presented to the Sebring Historical Society on October 21, 1986. Donald Hansen was and is the Medical Coordinator for the Sebring Races.

The first race (Dec. 31, 1950) was called the Sam Collier Memorial. There were 28 cars involved and it lasted for 6 hours. The Firemen’s Association was in charge of the event with Alex Ulmann serving as the advisor. The winning car was a Crosley.

The format for the second race (March 8, 1952) was considerably different from the first. It was now a 12 hour professional event rather than amateur. The winner, a Frazier-Nash made 145 laps around the 5.2 mile track. (Since 1952, the Sebring Race has been held in March.)

In 1953, the event was sanctioned by the Federation Internationale de l’Automobile and was listed as the World Manufacturers Championship. Thus, the Sebring Race became world renown. A Briggs-Cunningham (with a Chrysler engine) was the winner averaging 44.9 miles per hour!

There were 60 entries in 1954 and Stirling Moss drove the winning car, an Osca. On the very last lap a Lancia blew its engine.

The start of the Twelve Hours of Sebring was changed from noon to 10 A.M. in 1954. The race was now truly international in scope with such entries as Jaguars, Porsches, Renaults, Maseratis, Ferraris, and Mercedes-Benz. The winning team of Mike Hawthorne and Phil Walters drove a Jaguar.

In 1956, as the result of tragedy at Le Mans, France, the Automobile Association of America would no longer sanction Sebring. However, Alex Ulmann took over with Federation Internationale de l’Automobile approval and the race was held. Twenty-four out of sixty cars finished and the winner was Juan Fangio in a Ferrari. Fangio won again in 1957. This time in a Maserati. He later died in a racing accident.

Improvements were made for the 1958 race with additions of the big Martini and Rossi drive-over bridge and the Amoco walkover bridge. American cars were taking a back seat to their European counterparts. Phil Hill and Peter Collins were winners in a Ferrari.

In 1959, Phil Hill won again in a Ferrari. During the race, Stirling Moss ran out of gas twice in a Jaguar. The first Formula One Race, held on Dec. 12th, turned out to be its last.

The first Porsche win was in 1960 in a car driven by Hans Herman and Oliver Gendebein. An indication of the importance of the Sebring Race was the presence of Walter Cronkite who was the radio announcer.

Chaparral made its debut in 1962 (and finally won with Jim Hall in 1965). This (1965) was the “Monsoon Race”. The area was inundated by rain, and water was one foot deep in the pits. The victory of Chaparral was probably due in part to its better balance as the cars had to literally push water down the track.

1966 will be remembered as the most tragic in the race’s history. A driver, Bob McLean, and four spectators lost their lives. Another memory is Gurney pushing his Ford across the finish line and being disqualified. Fords won the first three places and the team of Ken Miles and Lloyd Ruby, led the pack. Ford repeated again in 1967 with Andretti and McLaren the winning drivers.

1969 marked the entrance of several new American cars. They were challenged by Ferrari and Porsche, but a Ford GT 40 driven by Jackie Icky and Jackie Oliver won. 1970 had the closest finish of any Sebring Race. Andretti driving a Ferrari beat out movie star Steve McQueen. A Porsche won in 1971 with a record 260 laps, but Alfas finished second and third.

The year 1972 marked the third victory of Andretti, this time with a Ferrari. This was the last time that the Ulmans would be in charge. The Federation Internationale de l’Automobile insisted on a number of costly improvements and the Ulmans did not comply. Thus, Sebring was removed from the international schedule. Reggie Smith formed the Sebring Automobile Racing Association and joined a new sanctioning body, The International Motor Sports Association. The Camel GT Challenge was established with John Bishop as Director. With the change, much of the international flavor was lost.

A Porsche driven by Peter Greg and Hurley Haywood won in 1973 by only completing 226 laps. The energy shortage caused the Daytona and Sebring Races to not be held in 1974. There was a regrouping and a new style with GT racing as well as a new generation of drivers. BMW won in 1975.

1976 marked the start of the Porsche reign. Al Holbart’s Porsche was the winner and Porsche had the first 6 places. Thirteen of the first fifteen positions were Porsches in 1977. The Porsche 934 Turbo was introduced in 1977. John Greenwood was out as promoter and many questions were raised as to whether the race would continue. To fill the void, Charles Mendez and David Cowart joined to form Sebring Motor Sports International. The rules were changed and prototypes were out and full bore race cars were in.

Mendez drove the winning Porsche with Brian Redman in 1978. Also, in 1978, Ford Heacock, III organized the First Vintage and Historical Car Race. Coca Cola became a sponsor in 1979 and again a Porsche won, this time driven by Bob Akin. The winning Porsche turbo completed 253 laps in 1980 and Sebring was beginning to get world publicity again.

The Sebring Firemen have been deeply involved in the race since its start. Many local civic clubs such as the Lions, Rotary, Kiwanis, etc. have raised a great deal of money from the event. The entire community has been affected by the race. For example, the schools and a number of offices have had a holiday the Friday before the race. Inspections of cars were held at one time, in down town Sebring near the Firehouse and what was then Sebring High School. Physicals for drivers were given at the Sebring Fire Station. In 1972, approximately 300 people had physicals.

There was a shortage of rooms during the early years of the Sebring Race. The Chamber of Commerce arranged for rental of houses and rooms. The Hansen family rented their home to several racers, but after the renters brought an automobile engine into their home, they decided “never again”.

Weather (rain and cold), while being a major problem for race participants has helped in crowd control. The removal of dirt bikes from the area has also reduced problems for law enforcement. The race has attracted many famous persons such as Paul Newman, Smothers Brothers, Steve McQueen, Walter Cronkite, Mitch Miller, Bruce Jenner, and James Garner.

During the first few years, Sebring had a Le mans type start which required drivers to run to their parked cars. This was discontinued in 1958 and a rolling start has since been used.

At a race several years ago, an Italian Photographer who spoke no English, positioned himself at one of the curves where the public is not allowed. Since he couldn’t respond to commands (in English) to remove himself, a Deputy was sent to remove him. During the ensuing scuffle, the photographer bit the Deputy. 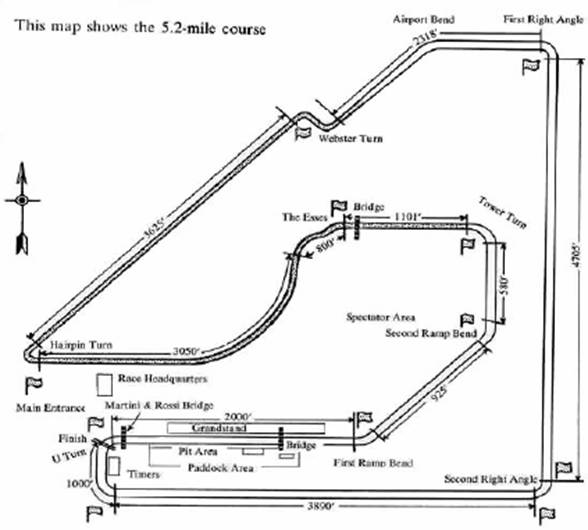 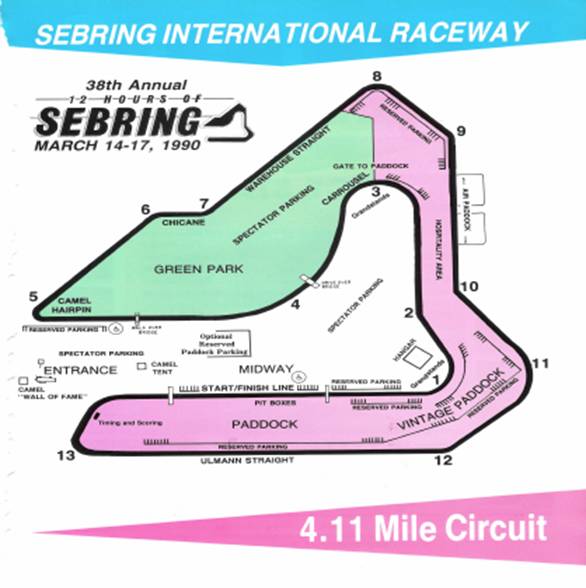