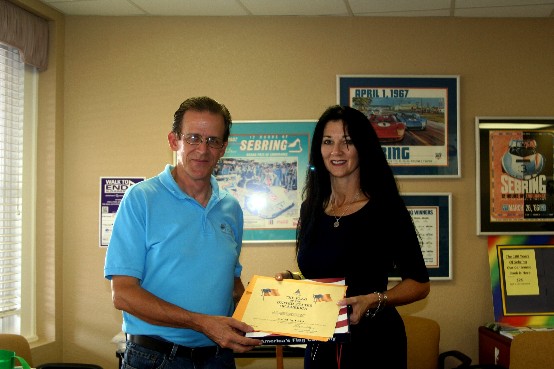 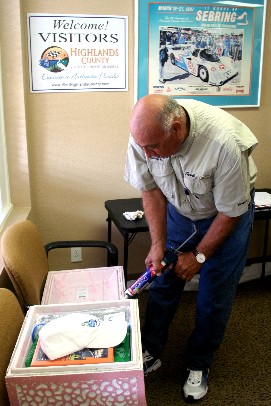 SEBRING -- Friday, the Sebring Historical Society and the Noon Sebring Rotary Club buried a time capsule in Circle Park. Tucked behind a park bench, the site is just down the path from the town cat Misty's burial spot.

In front of a crowd filled with local dignitaries, Mike Howard, of Highlands Independent Bank, Terell Morris (who donated the capsule) and city councilors Scott Stanley and John Griffin carried the capsule to the spot where it will rest for the next 100 years.

When the capsule at first didn't sit just right, Griffin told people not to worry -- digging it up would be another generation's challenge.

All the contents were doubled sleeved in plastic and sealed inside a pretty mottled pink and white ceramic burial urn.

The contents included the books printed for the 50th, 75th, and 100-year anniversaries, copies of official documents, flyers of past fund raising events, business cards, a program from the Founder's Day celebration in 1935, newspaper reports about the 9/11 attack and how it affected the people of Sebring, slide photographs of Highlands Hammock from the 1960s, the Centennial Notebook columns written by committee member Jen Brown and printed in the News-Sun, a music CD, coins and a dollar bill, a Bible, an American flag, an Army 7.26 cartridge brought back from Europe in 1941, a copy of the city's 2012-2013 budget and Police Chief Tom Dettman's badge.

After the formal burial ceremony, the crowd relaxed and danced in the streets.

The Mountain Dew Cloggers entertained and the aroma of grilled chicken and ribs filled the air. 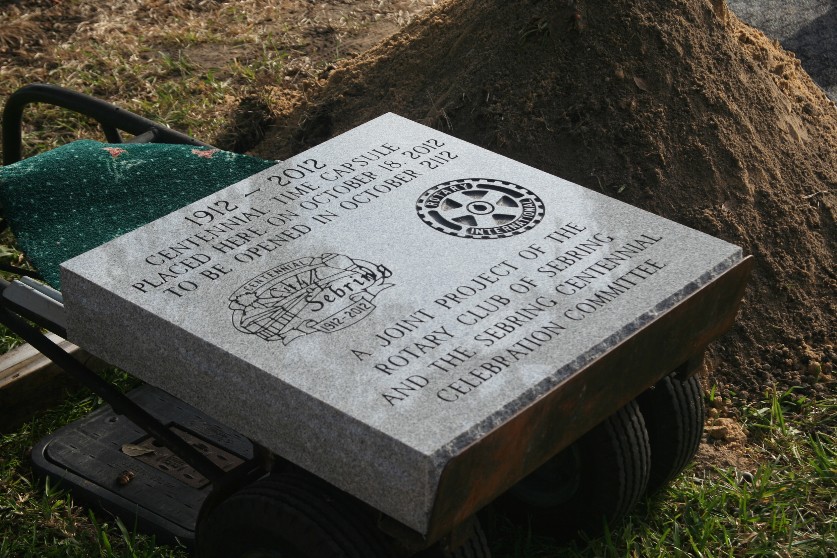 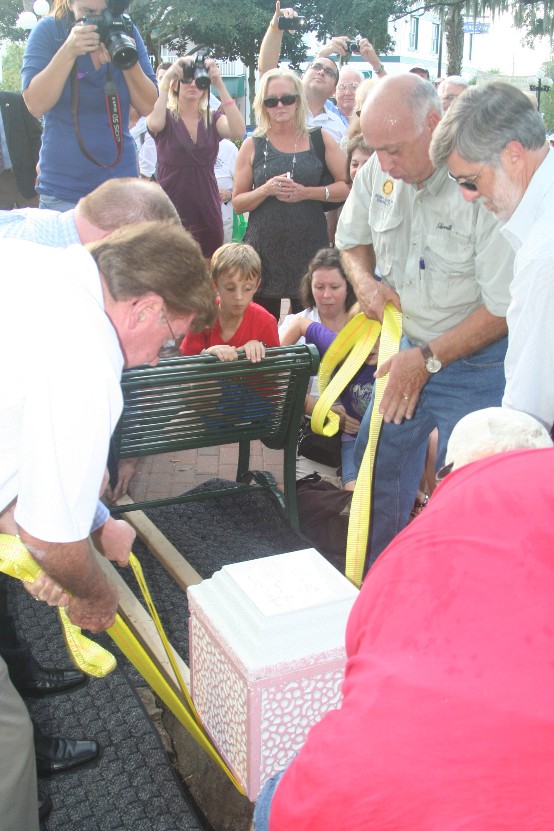 A time capsule will be buried in Circle Park, not to be seen again for 100 years, during a Greater Sebring Chamber of Commerce mixer that begins at 5pm today in downtown Sebring.

The capsule will be placed about 6pm today.  "The Mayor's Street Dance" will follow at 7pm.

In order to seal out the elements, the cement urn, provided by Morris Funeral Chapel, is lined with plastic, said Mike Jarvis, of Frames and Images, whose wife Vicki is working on the time capsule.

"Allen (Altvater III) has got archival plastic that he's putting everything in and sealing it, before we put it in the time capsule." Mike Jarvis said.

They're trying to avoid what happened to the time capsule the city last opened in which the contents had seriously deteriorated - "To the point where everything was a crumbled mess," said Carole Goad, archivist for the Sebring Historical Society.

"The former archivist taped a note on the outside of this thing and it said, 'How not to preserve a time capsule,'" she said, being quite serious.  "Then she left it on the shelf for me to find.  The container looked to me to be one of those old tin fishing tackle boxes."

Goad said it smelled bad and she finally got the board to allow her to get rid of it.  This one is being done right, she said.

Once the new time capsule is in the ground, a polished capstone will be placed on top stating "Centennial Time Capsule placed here on October 18, 2012 - To be opened in October 2112 - A joint project of the Rotary Club of Sebring and the Sebring Centennial Celebration Committee."

The pink urn may have been made for the remains of a baby girl, Jarvis guessed.  He did not think the pink had anything to do with October being Breast Cancer Awareness Month.

The urn will be located near the center of the Circle behind a bench next to the "Welcome to Downtown Sebring" sign, which is on the spoke of East Center Avenue.

Centennial event co-organizer Allen Altvater III joked on Monday that he thought the committee messed up with the 100-year timing of the time capsule.

"We should have made it in 50 years," he said.  "That way we might still be around (to see it opened once again)."

Police Chief Tom Dettman said Wednesday the Sebring Police Department has a few items it will put into the time capsule.

"We have my centennial badge with my name on it," Dettman said. "My biography, that's on our website; a pen handmade by our own (retired police inspector) Lamar Forbes, from our original wood floor at police headquarters when it was the post office, and a centennial shoulder patch.

Jen Brown, of the Sebring Centennial Committee, said she was sure that by tonight's setting of the time capsule the list of contents below will have grown.

But here's a brief list of some of the Time Capsule Contents at press time:

There will be a Centennial Luau at City Pier Beach at 7pm on Friday.  The boat parade is canceled due to a lack of participants, said Brown.

"Nobody was registered (for the boat parade)," she said.  "There were no boats other than the city's boat.  If any boats still come, they can dock at City Pier."

Also, they will have the CitiCars, which wre manufactured in Sebring, on display for the event.

"There should be about 23 of them at the luau," she said.  "The CitiCar Club is staying at the Kenilworth Lodge."


Pictures of the Time Capsule Contents are below.